Over 100 people, businessmen, expats and community members of southern villages participated Wednesday evening, October 9 , in a fundraising event “Rustic Feast “, organized at  Manuc’s  Inn. They celebrated together the coming of autumn, this year’s rich crops and growing funds to  develop the southern Romanian village.

” The event was an opportunity for our guests to rediscover – or learn for the first time – the charm of the traditional Romanian village. We encouraged them to wear a traditional Romanian element and to get lost in the beautiful stories of the projects that we support through our main program, PACTpentru COMUNITATE. Ladies  that weave , sew  and  are laying the foundations for new tailor shops in Cocorastii Mislii and Găujani , craftsmen who weave wicker  from Facaeni, Mr. Ionel Cococi that molds Vădastra clay following a technique originated in the Neolithic, a master  potter from Călimăneşti , wood carvers from Spaţov , a talented lady who makes folk dolls from Corbeni and young performers  of traditional music from Cândeşti, all beneficiaries of our program, have joined us to offer gifts for the auction and to celebrate in the Romanian way with the other guests who came to support them. The funds we collected, the harvest of good deeds, as we call it will be a starting point for new projects that we will support through the PACTpentruCOMUNITATE program, ” said Ruxandra Sasu , Executive Director.

The guests were greeted at the entrance of the old inn by crafts and traditional arts, music and dance typical of the Romanian South , but also by an exhibition of traditional art reinterpreted in modern ways by the group 4Art and a collage of folk riddles from Printotecă .

Many friends of our foundation have also attended the event: people and initiatives that are successfully using traditional elements in authentic or reinterpreted ways . As a consequence, at the auction people bid for clothes inspired by traditional themes from The Clothing Workshop (Atelierul de Haine) and Mândra Chic, paintings by Alina Manole and FurgaMurga and accessories form Iutta and Estuar. La Blouse Roumaine offered an ie specific to the Mehedinti area , Delicateria Florala brought a beautiful floral arrangement and Portul Cultural Cetate auctioned a whole day trip to the famous Danube port . In addition, guests competed in the auction for dinner at Lacrimi si Sfiniti (Tears and Saints), tickets for the theater company Daya’s play ” Șapte blesteme – cerute, făcute și legate ” and for the ring created by Mihaela Ivana. The final tombola  raised new emotions for the lucky winners of the book piles from Publica, the  ingenious wall sticker from Cai verzi pe pereţi, a cup painted with traditional motifs from Una ca Luna , three vouchers for ceramic objects  from Made by You, a painting inspired by the village life by Ioana Nedelescu and a bottle of premium wine from LacertA , which was tasted with delight throughout the evening by all of the guests.

The 6000 RON that were raised during this harvest of good deeds represent a first part of a lengthy fundraising campaign conducted for future projects that will contribute to the sustainable development of the communities in the South of Romania. Additional donations can be made in PACT Foundation’s account : RO23BPOS70606197144RON06 opened at BancPost, Uiversitate, CUI / CIF : 18583918. 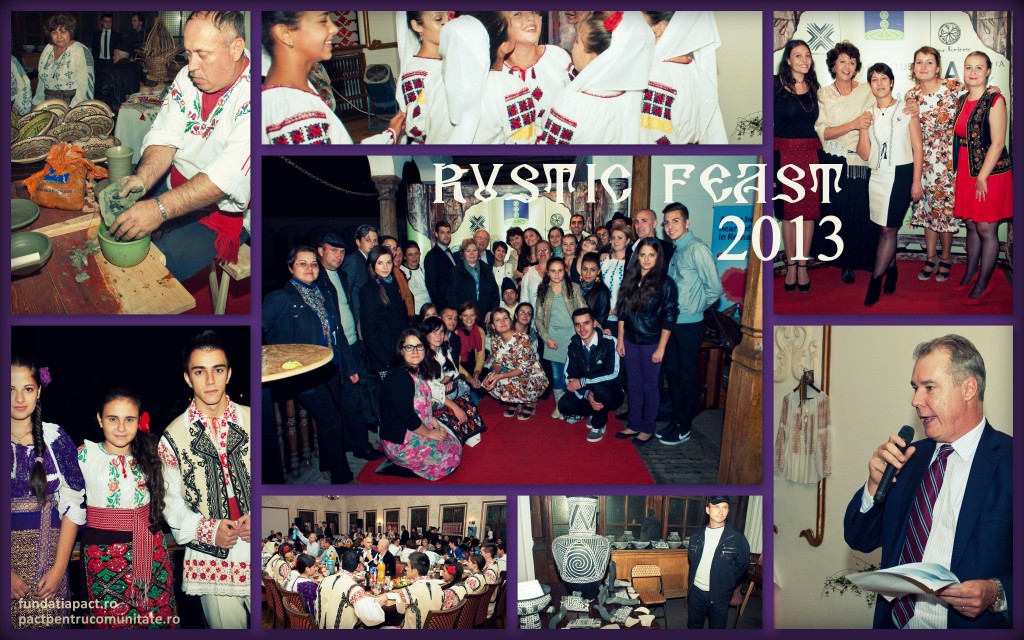 For one evening in the heart of Bucharest, PACT Foundation will bring the southern Romanian village to life through a Rustic Feast that revives old habits and traditions all the while giving you the opportunity to contribute to their preservation and well-being.

Rustic Feast is an event that celebrates PACT’s activities and the wonderful people we have worked with in the communities over time, bringing them together with old and new friends, partners and supporters, all who believe that together we can make a difference.

Thus, we’re expecting you, on October 9 at Manuc Inn to get lost within the traditional cultural riches offered by the Romanian southern village. Whether you will take delight in traditional dishes, doina rhythms or you will raise a glass to the harmonious sounds of local musicians, the feast will capture you and you won’t even know when you grabbed the hand of the other participants to join the hora.

When you come, you will be welcomed by a living exhibition of arts and crafts displayed by the people from our communities, small workshops for old ways of weaving clothes or wicker baskets, making brooms, manually processing wood or modeling clay, handmade folk dolls and many other items inspired by traditional customs and talented people ready to guide you on a journey to discover them.

Because this evening is more than a feast, it is a harvest of good deeds, during the event you will have the opportunity to support all these traditional treasures of the village and the people living in harmony with them by participating in an auction and a tombola of special gifts and activities offered by our partners and people from our communities. Whether it’s about a reconditioned romanian traditional blouse (ie) from La Blouse Roumanie or one that is reinterpreted to urban ware from Atelierul de Haine, a clay vessel crafted by local masters, an invitation to a fisherman’s evening, a village gathering (the Şezătoarea custom) with the locals, at the end of the evening you can walk away with a souvenir gained as a symbol of your contribution to the rediscovered world of the village.

Any contribution that you make is a good deed that we, at PACT, are lucky to have the opportunity to harvest for the communities in which we work. The seed that you will plant on this evening will grow into a croop of good and the people from our communities will have the chance to reap the benefits. With a rich harvest, we will support new initiatives such as the 12 local projects and initiatives in our communities that PACT is funding this year with 40,000$ through our main program PACT pentru COMUNITATE.

As the dress code for the Rustic Feast is something traditional Romanian, we want to make it easier for you to find the right element for the evening. So, on the 21st of September, we invite you to La Şezătoare, a weaving and sawing workshop where you can find the right clothes and accessories for the 9th of October from our friends from Iutta, Atelierul de haine, La Blouse Roumaine and from our communities. You can also bring your children as they can take part in a handmade folk dolls workshops while you find the right combination for the event. You can come whenever you want from 12.00 until 18.00. During the day we will have a series of workshops, and also time to decide on the right combination. Our hosts are the our friends from Coftale (Stefan Mihăileanu 42).

To join the harvest on the 9th of October, your contribution will consist of 100 euros / couple as an entrance fee. For details and confirmations we expect your email at ioana.traista @ fundatiapact.ro and / or 0723 334 645 . To keep up with news about the event, follow us on rustic.fundatiapact.ro.

To get ready for the Rustic Feast, we are waiting for you at La Şezătoare on 21st of September, at Coftale (42 Stefan Mihăileanu Street).